An edited version of this post originally appeared on About Time magazine here.

No stranger to casual dining (he’s appeared on BBC Saturday Kitchen, and his Calabrese pizza appears on the Pizza Express menu), Mazzei now wants to offer his familiar Calabrian dishes in a more chilled setting.

After a quiet soft launch, L’Anima Cafe is now officially open. Here’re five reasons why we think it’s about time you went:

Some London restaurants seem all about the hype, less about the food. Not here. This is the gooey, crunchy, fragrant and foodie equivalent of a lazy morning, with nothing and no-one to answer to.

Think aubergine in tomato sauce with mozzarella and a wood-fired sheet of bread; lamb with al-dente pasta rings and an intensely-spicy smudge of n’duja; flash-fried squid with baby tentacles, plus tangy tomato, basil and olive oil.

A mosaic-tiled wood-fired oven near the bar means it would be practically illegal to come here and not try a pizza: mine came piled high with whole smoked garlic cloves, mozzarella, and Calabrian ham, all draped languorously over a crispy-chewy base…Dessert was just as good: Our dollop of tiramisu came with lightly-whipped mascarpone on a boozy biscuit layer, sprinkled with cocoa. Heaven.

For evidence that L’Anima Café is related to L’Anima, look no further than the flawless service. Smartly-dressed bar staff were friendly and accommodating, the manager was enthusiastic (if perhaps, just a tad too much). We didn’t wait too long and everyone was helpful. Overall, the impression was simply of someone wanting – and managing ‒ to do a good job. You can’t argue with that.

It’s not exactly budget, but the value for money here is surprising. Large antipasti start from around £6 per plate, while mains start at £9-10 (compared to L’Anima, where starters begin at £9.50).

If you were after a light dinner, you could get away with spending little over £20 for a good meal including a glass of wine, which is actually pretty damn good for a restaurant with one foot firmly in the City.

4. The atmosphere
It’s no cute bohemian joint, but who could expect that after the monochromatic lines of Mazzei’s other place?

Instead, this site somehow manages to deliver a relaxed atmosphere without totally forgetting the crisp, upmarket setting of its big sister.

A wide bar area encourages pre-dinner drinks, cool lighting throws shapes around the walls, and there’s no white tablecloth in sight. It even has a delicatessen in the back, should you ever get a daytime craving for the best ham Italy can offer.

The entrance even has a “market stall” display of bread and glossy vegetables, which screams “hot sunshine” and “Italy” no matter the weather outside. *Happy face*.

5. The Vespa!
Just as you were getting a bit depressed at the thought of leaving, fear not – there is an actual Vespa in the entrance area. Yes, really. 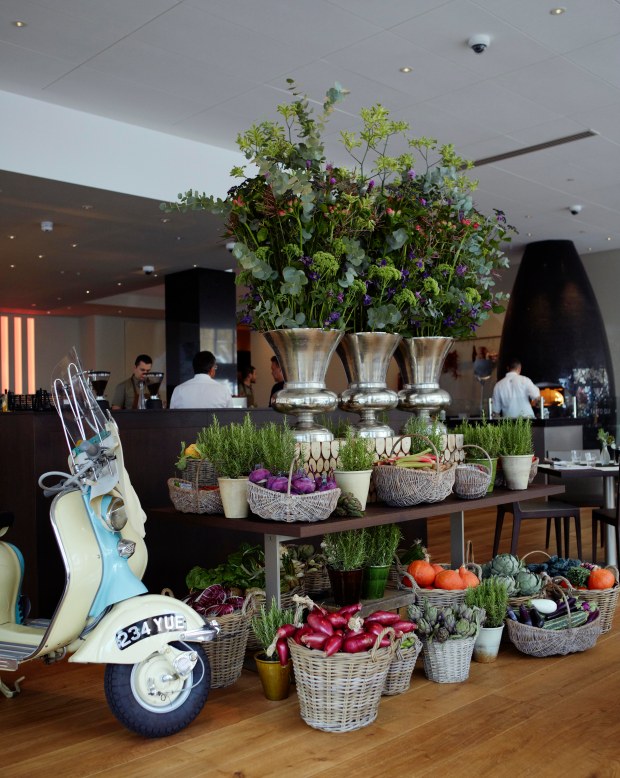 If you’re really lucky, (or one too many cocktails down) the waiter might indulge your threats to take a seat on said bike, letting you imagine a trip through groves to the nearest sun-soaked Calabrian town to your heart’s content.

And yet, even if your visit doesn’t involve a motorbike ride, you won’t be disappointed.

I wandered back to Liverpool Street imbued with deep satisfaction, a faint whiff of smoked garlic and tiramisu, and the sense that L’Anima Café is somehow that rare London thing: a great meal in a friendly place, for not too much.

An edited version of this post originally appeared on About Time magazine here.

A beyond-fabulous offer from work leads me to this Michelin-starred, glass-ceilinged restaurant. One word: incredible.

Apsleys in The Lanesborough Hotel 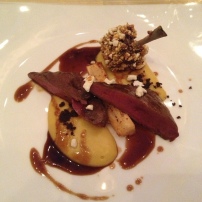 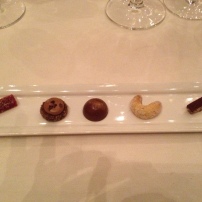 A line of loveliness

From the moment we walked into ‘Apsleys – A Heinz Beck Restaurant’ in the sumptuous Lanesborough Hotel, it felt impressive yet welcoming, extravagant yet homely. A wide, glass ceiling and a trio of sleek chandeliers sparkles in the light against a modern-style Italian fresco, while a deep carpet and comfortable chairs and sofas lend the room a living-room feel, albeit a very well-appointed one.

The London home of three-Michelin-starred German chef Heinz Beck, who won his stars at Rome restaurant La Pergola, Apsleys promises much, and I must admit, I wasn’t sure whether it would live up to its reputation. In my limited experience, “top” restaurants can get caught up in their own hype, and so believe in their superiority that the actual food gets lost among lacklustre sauces or regrettably slipshod front-of-house staff.

About two months ago, I had my birthday meal at another Park Lane hotel restaurant, which shall remain nameless, and it felt like a below-par exercise in mediocrity, with too-low lighting, sterile atmosphere, soggy vegetables, hovering yet inattentive staff and a lobster and tomato sauce pasta dish that I can only remember for its distinct tomato ketchup quality. Food that was trying its best was ruined by staff barely better trained than the waitress at your local Pizza Express (and there you get a smile and two decent courses for a tenner and a five).

No such complaints here.