So, I’ve failed. Just over a week until Christmas, I’ve decided that Operation Grow My Nails will be temporarily suspended until the New Year. It’s a month since I took my false nails ‒ which I’d worn pretty much every day for the past seven years (no, not the ACTUAL same ones, before you ask) ‒ off with the intention of not putting any back on again.

I decided to enact Operation Grow My Nails after I went to Cornwall, saw an awesome group of people play guitar and the mandola and a load of other amazing folk instruments in a pub, and made the choice that I wanted to learn guitar more than I wanted to wear false nails.

I’d been trying to learn guitar for ages, and couldn’t really press down hard enough on the strings to make a nice sound, because my longish nails kept getting in the way. Dolly Parton can apparently play guitar with two-inch-long talons (above!), but that’s because she’s a country goddess who can do no wrong. Us mortals need short nails to play properly, I’m told (well, mismatched nails, actually – short on the string hand, and long on the strumming hand. But small steps, people).

BUT, one of the reasons I wore false nails for so long in the first place was because my real nails have always been dire. They are thin, don’t grow, break easily, flake, and then, to add insult to injury, I bite them with the ravenous hunger of someone who hasn’t eaten for a week.

I realise that terrible nails can be a sign of a serious mineral imbalance or whatever, but, since I eat a generally healthy diet and take regular vitamins etc, I don’t think that’s my problem. I think my problem is years of biting, followed by years of sticking on little bits of non-porous plastic with harsh, unforgiving superglue.

Literally the best moisturiser in the world. OK, so it’s hardly a match for my ruined nails, but it is otherwise AWESOME, sinks in easily, and smells DIVINE. Love, love, love

This has left my nails weak and dry, a complaint that has only marginally improved in the month since I let them breathe. I have moisturised several times a day (more than I ever have before). I have used various Miracle Cure-style polishes. I have bought “cuticle remover”, an exfoliating cream specially designed for nails and hands. I have tried to become more conscious of when I’m biting my nails, and tried to take pride in the ones on which a sliver of precious white nail has begun to grow.

And yet still, they look what can only be described as shit.

In the past month, I have managed things I didn’t think I could (only marginally exaggerating, I swear) without the habitual armour of my perfectly manicured false nails. I went out for a reunion dinner with old university friends, attended an important meeting at work, and went on a first date.

And you know what? No one gave a shit about my nails, except me. I realise this.

I’ve also realised that not wearing fake nails means you save money and time on maintaining them, and you can do things like soak in a bath or do the washing up without cringing about what the hot, soapy water will do to your manicure. These seem like worthwhile life lessons. AND YET.

Despite all these admirable realisations, the nails are STILL GOING BACK ON for Christmas and New Year. I can’t face 2015 with gross nails. It’s just not happening. I mean. LOOK at them. Ugh. 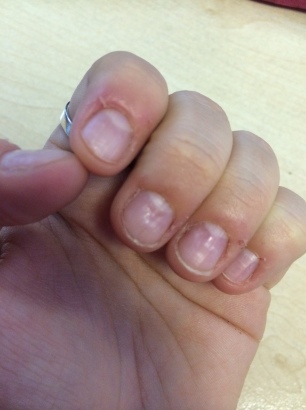 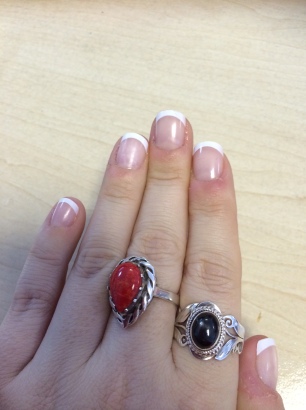 Without false nails, I feel un-groomed, a bit dirty, under-dressed, and a bit less feminine. I hate that that’s true. I hate the consumerism of it, and the ridiculous feminine stereotype I’m willingly conforming to. AND YET. It’s true. I’ve tried, and so far, I’ve failed.

There is more I could do. I could use more foul-tasting polish. I could apparently get a “gel overlay” specially designed to stop you biting. But not before Christmas. No time.

Can we just forget the fact that I’m supposed to be cultivating nice, shortish nails in pursuit of certain musical success (cough), and just forgive my abandonment of you?

Forgive my horrible nails, and forgive my slavish addiction to falsies? In the spirit of Christmas and goodwill, yeah?