Like any respectable middle-class food snob, I was initially aghast at the sight of a new Tesco’s taking over a beautiful 1920s former bakery building near my road. But a loving restoration, coupled with a foray into the bakery’s past, shows me that this new supermarket need not signal the end of all things

The Old Matthaie Cafe…now the 1,500th Tesco Express [my own image]

The appearance of a new supermarket near you is perhaps not the most obvious prompt for a trip down memory lane, but when building work started, at an alarming rate, on a new Tesco Express nearby, I had to find out more.

Aren’t such supermarkets the epitome of everything that lovers of good food, history and community don’t like? Surely, this would mark the death knell of the clearly-old premises?

Because this isn’t just any old building. This is the old premises of Café Matthaie, a beautiful 1920s-style shop near Richmond in Surrey, whose twinkling blue glass façade, original silver lettering and gloriously geometric clock hint at a faded age of glamour, community and seriously good cake ‒ even as the front was boarded up amid the promise of new, ‘luxury apartments‘.

Walking past the building every day, I’d always wondered at the art deco shapes, and the wonderful blue signs suggesting that at some point in the past, this was the home of ‘Confectioners’ and ‘Pastry Cooks’, rather than faceless clapboard. But the appearance of a worrying new sign outside – ‘Your new Tesco Express, Coming soon’ ‒ finally prompted me to find out more before the beautiful building was gone forever.

A little bit of initial research found that I wasn’t the only one with an eye on the place – photographs of the boarded-up building showed that others had noticed the old signs, and a quick questioning of neighbours found that several remembered the old café. But when had it closed? And why? How old was it? And what in the name of cake was Tesco’s doing to it!?

In a curious twist, I found that the old café had shut down in 2002 due to a new bus lane and – oh, irony ‒ competition from new local supermarkets. 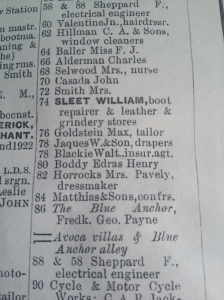 Run by the Matthaie family since 1924, when it was reportedly bought by Fred and Reg Matthaie, the most recent (and last) proprietor, Richard Matthaie, had even been born above the shop in 1939. Directory records show a bakery on the premises, under the name of ‘Falkner’, as early as 1920, changing to ‘Falkner and Son’ by 1923. However, by 1924, the listing for 84 Kew Road has changed, thrillingly, to ‘Matthias&Sons’; Confrs. [Confectioners]’.

The 2002 Richmond and Twickenham Times article announcing the shop’s closure shows a smiling, round-cheeked man, lamenting the effect the new bus lane had had on his business, but expressing his love at continuing to make real and model food for the film industry – even selling cakes to famous sets on classic British films such as Four Weddings and a Funeral and Sense and Sensibility.

Here was a man – and a business, it seems ‒ sitting right at the heart of a very English nostalgia.

Indeed, many former residents appeared to agree; this same local paper became a magnet for decades-old memories, with letters flooding in from those who could remember the friendly and efficient old waitresses, those who had a “very good Saturday job” at the bakery, who helped with the “wedding receptions” and “mayoral receptions” it catered for.

Another letter-writer remembered her own reception there in 1954, and recalled the night during the war when it suffered damage from an incendiary bomb on what another writer called “a bad November night”. The café appears to have carried on in true Blitz spirit during the conflict, according to another writer who remembers the staff “working wonders” on a “magnificent wedding cake…in spite of severe rationing” – even though the impact was reduced slightly when the real cake was revealed to be a smaller treat hiding behind a “cardboard camouflage”.

Former-owner Richard Matthaie himself responded to the stack of memories piling up not unlike freshly-baked scones, calling the letters “a fascinating journey” and thanking everyone for their good wishes.

But what of the bakery nowadays?

The revelation that it is to be turned into a Tesco’s has hardly gone down well with the local residents I chatted to, with one woman positively dismayed behind her half-moon glasses; recalling fondly that she bought her now-28-year-old daughter’s first birthday cake at Matthaie’s and despairing of the fact that there are already many other supermarkets within walking distance.

A quick check on Twitter as to whether anyone remembered it and what they thought of the new supermarket’s appearance, confirmed this view, and received nothing but derision and a cheeky mention of that well-known pest, Japanese knotweed – not the most flattering of comparisons by any measure.

And yet, walking past the bakery in the week up to the supermarket opening, I found myself pleasantly surprised.

Not only has the blue façade been preserved and cleaned up, but the first two windows have been positively restored; archive photographs of the bakery in its heyday adorn the walls, while a table and chair, complete with (fake) tea and cake arrangement and a vintage handbag, sit for all the world as if the glamorous customer has just nipped off to the loo.

The wedding cakes – one of the windows restored in homage to the old bakery, by local company Design etc [my own image]

Three incredible wedding cakes line the next window, as creamy and inviting as if they’d just been baked. Only the next window reveals the ground floor’s new supermarket status – and to its credit, Tesco’s has forgone its garish blue and red sign for a rather more sedate silver version on this most unusual of frontages.

“We wanted to preserve it,” says Jo Branch, from Design etc, the Ham-based company behind the careful mock-ups in homage to the bakery’s past. She remembered three cakes left in the window after Matthaie’s closed, she explained, and “that was the inspiration” for the new display.

The revelation that this is the 1,500th opening of a Tesco Express should, by middle-class, foodie-loving, history-loving rights, send a shiver down my spine – and while I’m hardly pleased that this local shop has succumbed to the supermarket behemoth’s relentless march, there’s a curious kind of comfort to be found in the sense of change that it’s brought to the street.

Tesco’s hardly has the best of reputations, and yet I’d wager it’ll be a strong commuter who manages to resist its convenience on a bit of road currently sorely lacking in useful shops – and like it or not, it’s a nod to the new way in which we shop. While Tesco’s has received much criticism in recent years, about everything from the quality of its produce to its relentless ubiquity, as someone interested in history, I’m cautious about labelling ‘progress’ and ‘the new’ as necessarily a bad thing.

Matthaie’s closed ten years ago, citing pressure from local supermarkets – and has been boarded up ever since. While its new incarnation provokes a sad sense of irony in light of its past, isn’t it better that it’s open to locals again, who may now actually use the building, and appreciate its history – rather than being demolished, left to ruin, or worse, entirely closed off from all but the rich residents who can afford to buy a new flat?

Perhaps it would have been more romantic to restore the building’s ‘Function Room’ and restart its bakery ovens – but honestly, nowadays, would we use it in the same way? For all its negative points, the Tesco renovation has arguably given us the best of both worlds: a shop that will actually get used, and a Grade II listed façade that has been lovingly restored to showcase its best historical moments.

Perhaps Brian Daly from Evelyn Road, Richmond who wrote of the cafés “scrumptious cakes”, or R Harris of Penton Road, Staines, who enjoyed his wedding reception at Matthaie’s in 1940, wouldn’t be as disappointed as we might think about that.

4 thoughts on “For the love of cake: The old Matthaie Café”